Situated in a geographical strategic position, Trani  has always been a cultural and economic center of  Apulia: and it is for  such prestige that Trani has been called "THE APULIA’S PEARL".

he neighbouring place’s inhabitants.  Moreover   some of its characteristics make Trani  important also for  culture, art and history.

The legend tells that Trani would have been founded by “Turenum” the legendary son of the Homeric  hero Diomede.Trani is distant from Bari, chief town of province in  Apulia, only 42 km. Extended over a surface  of 102 km2 with a population of approximately (60.000) Inhabitants, it rises  7 m above sea-level on the Adriatic shoreline in correspondence of a small bay that constitutes a well repaired port. 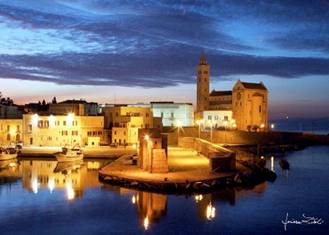 Quarry  a well appreciated building stone, known precisely as 'Trani stone' is the main economic activity of the city , in addition to the   wine cultivation for D.O.C ( Protected Designation of Origins)  products,  including the famous Muscat, the production in the agricultural and alimentary sector and the Extra- Virgin Olive Oil. 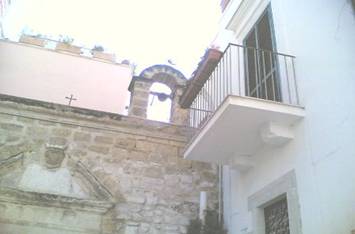 The ancient center of Trani, with numerous monographs written on it’s Architectonic, Cultural and Historical character,   since  ancient times has attracted numerous important personages , such as : Vittorio Emanuele II, Umberto di  Savoia, the Kaiser and recently the Royal of Sweden, of England, of Belgium and the Prince Filiberto di Savoia. 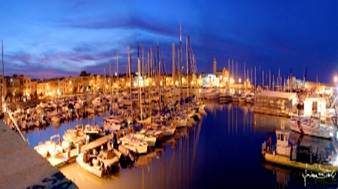 The Historical Center, well formed in its quarters has been made precious by artisticbuildings belonging to every age and every style, bestowed with tightened and winding roads according to typical medieval urban planning, wisely restored under the supervision of the Cultural Assets, so that it has become a wonderful center of modern life characterized by multiple premises and typical bars visited usually by tourists andlocal people.

The port  is a spectacular “scenography” for summer town  celebrations in honor of S. Nicola the Pilgrim, patron of the city, and an  ideal site to admire the fires works characterizing the multiple events  of Trani. (photo .fires) The port is one of the most equipped in the Southern Adriatic coast for the nautical amusement and a point of reference in the panorama of the national and international sport navigation ( Sailing  Tour of Italy, Adriatic Cup, Team Dubrovnik, the “Venezia –Montecarlo”) It is among the most beautiful on the Adriatic coast appropriate for both monuments and promenades. 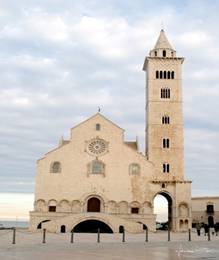 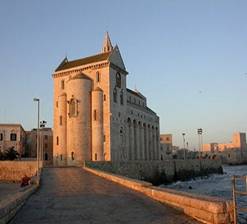 still more fascinating thanks  to its

position in proximity of the port thus

making it possible to be admired

from whichever part of the shoreline.

The Upper Church with a fortifying

system rests on 2 crypts, the first

one built in order to preserve

the relics of S.Nicola the Pilgrim

the other dedicated to

Underneath the latter crypt is situated

the Hypogeum of the first patron

of the city S. Leucio.

founded by Federico II in the 13thcentury is unique among other castles of the emperor for its unusual position since directly facing to the sea. After being used for decades as prison, today restored and reopened to public it becomes museum and often artistic and cultural place for conventions and manifestations

The Jewish Quarter
The jewish Quarter, a witness of an important Jewish presence in the city, is among the largest of the

And, at the end of this trip of ours  cannot be absolutely

missed the  wonderful scenery offered to us by the

"Communal Villa ", the fantastic viIla situated at the

peak above the sea.. Its richness of trees of every

kind and varieties of bloomed plants hides an extremely

peaceful and serene atmosphere. It is one of few places

able to rest you when the torrid summer does not 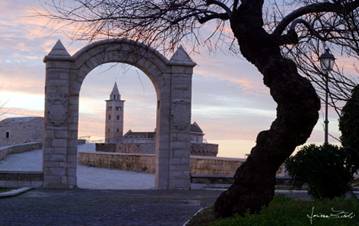 allow any  repose. It is a pleasant place attended by

adults and kids and further on thanks to its positioning

is possible to admire on the right the monastery

of Colonna and on the left the port with "

the Queen of apulian Cathedrals”. Among other

monuments that characterize our city, we can

mention some churches witnesses of the centuries

of history that have preceded us: Diocesan museum, Church of S. Giacomo, S. Maria di Colonna, S.Francesco, S.Andrea, S. Giovanni and S. Luigi the last one returned to its ancient splendour after a long restoration.